Had it come to fruition Feb. 6 as it has before, Luke Faulisi would have personified fortitude as it was.

A defenseman in hockey and one of The News-Herald coverage area’s premier divers throughout his career, Faulisi likely would have tackled two sports — for two schools — in a matter of hours.

His rib cage rendered that moot, but Faulisi still displayed fortitude in reserve during the Division I Solon Sectional for boys diving.

Wincing from a bruised right rib, the standout junior gutted out a full 11-dive afternoon to take sixth with a score of 311.65.

#NHdiving Here’s Luke Faulisi’s 11 dives at D1 Solon Sectional today
(Again, I was there today primarily to write a feature story about him for tonight online/FRI paper, & he had to gut it out with the rib issue) 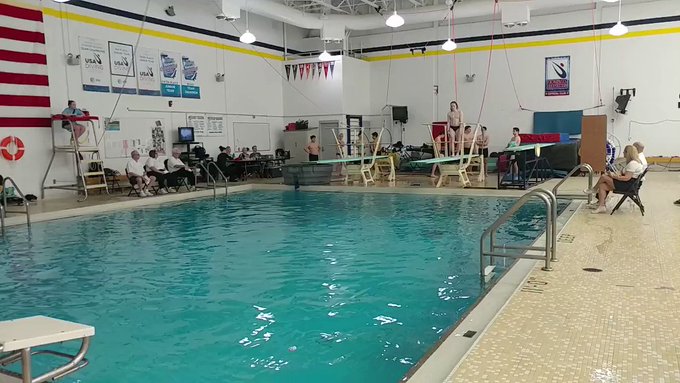 With advancement to the D-I Cleveland State District already in the bag, the score was not overly important but was a new wrinkle after spending two years in D-II, in which there is no sectional competition.

“I haven’t done any hard dives today. I was doing dives under 2.0 degree of difficulty. It hurt a lot, but I just fought through the pain. So I’m not going to get a high score, but I know I made it to district because there’s only 11 of us. But hopefully, I’ll be healed by district.”

Faulisi is in a unique situation this winter, representing two schools in different sports.

He was a D-II state placer in diving the last two years for the Bengals, taking eighth as a freshman and fifth as a sophomore, and also is a promising young blueliner on the ice.

But because Benedictine dropped swimming and diving this winter, it left Faulisi in need of a school for which to dive.

Enter Euclid, in which Faulisi resides. Ohio High School Athletic Association rules allow for student-athletes to compete for their “home school” if the school they attend doesn’t offer a given sport.

So similar to Amaedeo Cantini, one of this area’s best two-way performers in hockey who is playing his senior year for Mentor with Lake Catholic’s program going dormant, Faulisi represents two schools at once.

Only in this case, it’s in two sports, increasing the degree of difficulty on more than just the diving board.

“Lucky enough, my mom knew the coach of the Euclid swim team, Ann Ingram, and she said she would 100% have me and (fellow Benedictine student-athlete) Charlie Malberti help her with her team in dives,” Faulisi said. “It kind of just went on with them over here. I’m very grateful. If it weren’t for them, I wouldn’t be diving here today.

“This year, (the two-sport balance is) probably more difficult. We’ve had less morning practices. So they’re starting to become more frequent at night. We’re having really late practices and practices around times where I usually go diving. Usually, I miss some hockey practices. I show up to dive practices, and right after diving, I go to hockey. I show up late, and Coach (Bob Kehres) skates me because I’m late. But it’s all right. I like playing both sports, so I make it work with my schedule.”

That would have been the case Feb. 6, with D-I boys sectional diving at 4:15 p.m. at Solon and Benedictine with an 8 p.m. GCHSHL Red Division game against Cleveland Heights.

“I got hit blindsided, and I just didn’t see it coming,” Faulisi explained. “And it knocked the wind out of me. I didn’t feel it until after the game, though, because of all the adrenaline I was feeling. It’s gotten better since then, though.”

“When diving finally started, it took us a while to get through all the divers, around 24 of us,” Faulisi said. “So it took a minute. Then I didn’t hear any of the scores. I didn’t hear a thing about who got what place or whatever. I didn’t really care about a thing except leaving and driving all the way to Kent State for a hockey game against Hudson. Yeah, it was a really hard day for me. I got worked a lot.”

Faulisi stated, provided his rib heals adequately enough by Feb. 13, he plans to inject harder dives into his regimen, including a goal of incorporating a 3.0 degree of difficulty dive for district and state.

“We haven’t been winning as many games,” Faulisi said. “But we’re slowly improving, and I feel like next year, we’re going to have a way better season.”

The news of being unable to represent the “Men of Benedictine” in diving was admittedly tough. But it affords a chance at history for Euclid. The Panthers have had four top-four state placers all-time in boys diving, the last coming in 1979, when Scott Harmon won a state title.

Being a two-sport athlete for two schools is a display of fortitude. Faulisi had to show fortitude differently Feb. 6. But either way, it’s commendable.

“I like diving for my school,” Faulisi said. “I know I would have been in state for D-II. There was a high chance I could have won. I kind of wanted to for the school — we haven’t won one in a while, so my name would be up there.

“I’ve been adjusting to Division I. It’s just harder, because there’s better divers. But I think it’s better competition, and it’s better for me. It makes me want to challenge myself more.”

Malberti was fifth at Solon with a 394.15. Other area divers competing at this sectional were Riverside’s Trent Babcock (eighth) and Mayfield’s Nick Zanella (ninth).